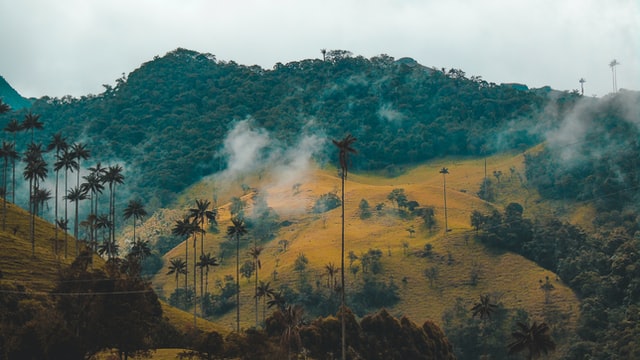 Deforestation in Colombia has been one of the socio-environmental consequences related to the current implementation process of the peace agreement between the Colombian government and the guerrilla group Fuerzas Armadas Revolucionarias de Colombia– Ejército Popular (FARC-EP).

The signing of this agreement has had positive impacts, especially regarding the demobilisation of thousands of combatants and the arms abandonment, but also has exacerbated the illegal extraction of natural resources in and around national natural parks in Colombia.

One example is Tinigua National Natural Park, which showed increased deforestation rates two years after the signing of the agreement, i.e., in 2016 it was 0.7 % (1539 ha) and for 2018, 5.6 % (12000 ha) of the total area of the park. After 2016, new actors have come to this protected area and its surroundings to control the territory (e.g., landlords, external investors, dissident groups of FARC-EP and some structures of paramilitaries).

In this context, we carried out an interdisciplinary analysis of the complex situation that relates Tinigua Park to the peace agreement. This analysis was focused on exploring and describing deforestation as a socio-environmental consequence of the peace agreement, as a result of synergies of new actors inside the park and socio-economic dynamics in the timespan from 2003 to 2018, considering key events before, during and after the signing of the peace agreement in 2016.

Our findings underline the close relationship between the expansion of livestock farming, land grabbing and illegal extraction of timber as the main drivers of deforestation in the park. Coca plantations do not seem to have a great role in deforestation in this area, but it has been meaningful for the socioeconomic dynamics of some families within the park and the reason for the current military presence.

Finally, it can be concluded that the poor implementation of the peace agreement caused an increase in deforestation in this natural park and promoted the influx of new settlers and new dynamics within the park boundaries, due to the absence of FARC-EP and the precarious presence of the central government.