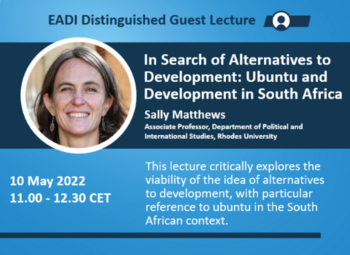 While the word “development” usually has positive connotations, there have been many critiques of the concept and its application. One of the most prominent of such critiques is advanced by post-development thinkers who argue that the ideas and practices associated with development wrongly assume the universal validity and viability of Western values and ways of organising economic and political life.

Post-development thinkers believe that the so-called “developing” world ought to draw on non-Western concepts and practices to build “alternatives to development”. In so doing, concepts like buen vivir and sumak kawsay (both meaning something like “living well”) coming from the South American context have been attracting interest. In relation to Africa, some commentators suggest that the concept ubuntu (referring to something like a feeling of common humanity) could be a useful concept upon which to base alternatives to development in Africa. This presentation critically explores the viability of the idea of alternatives to development, with particular reference to ubuntu in the South African context.

Sally Matthews is an Associate Professor in the Department of Political and International Studies at Rhodes University. Her teaching and research interests are in the following areas: development theory; the political economy of development and aid in Africa; NGOs and social movements in Africa; race, identity and higher education transformation in South Africa; and the scholarly representation of Africa.

The event is online.