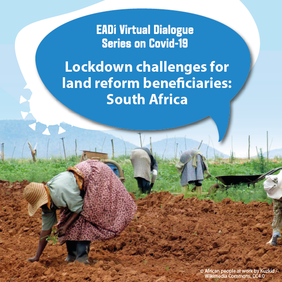 With Nkanyiso Gumede, Researcher, Institute for Poverty, Land and Agrarian Studies (PLAAS). Smallholder farmers and land reform beneficiaries have been greatly affected by the restrictions of movements that took place in South Africa with the declaration of the global pandemic. The reduced mobility for farmers and a drop in demand for produce, resulted in a loss of income. South African’s Minister of Agriculture, Land Reform and Rural Development announced a Covid-19 relief fund for South Africa’s smallholder farmers and land reform beneficiaries but concern has been raised about the nature of the support.

A rise in theft and restrictions on labour movement have further exacerbated the plight for farmers. In this virtual dialogue Nkanyiso Gumede, from the Institute for Poverty, Land and Agrarian Studies at the University of the Western Cape will detail the issues impacting farmers and how support and how relief aimed to mitigate the impact of Covid-19 for farmers and land reform beneficiaries must be relevant and based on a thorough consultation with those it targets.