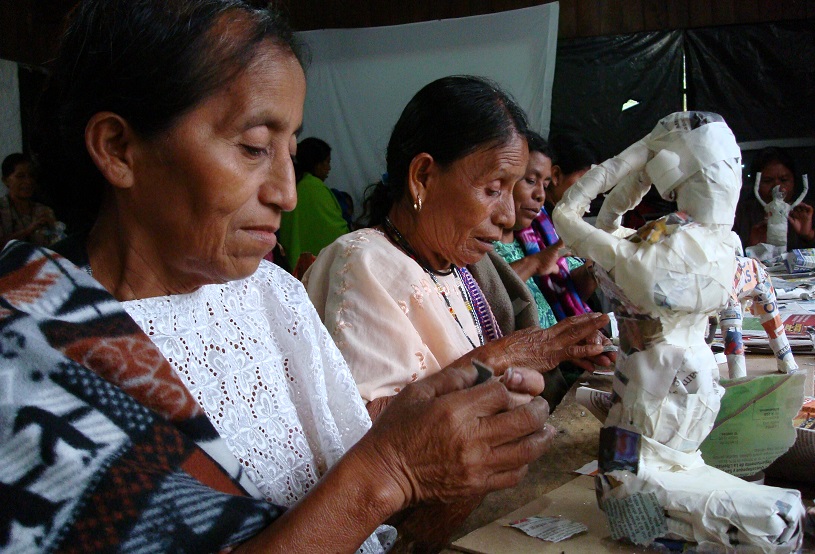 20 years of the Civil Peace Service (CPS): in Guatemala, the CPS is helping indigenous women protect themselves against sexual assault.

The trial concerning the sexual assault of indigenous women during the Guatemalan civil war lasted 20 days, after which, on 26 February 2016, the court issued a historic ruling, handing down lengthy prison sentences to two former high-ranking military officers.

Victims find it incredibly hard to speak openly about torture and rape. The Guatemalan women’s organisation ECAP (Equipo de Estudios Comunitarios y Acción Psicosocial – organisation for community research and psychosocial action) assists women in getting legal advice and provides psychosocial help if they have to make a statement before the court. This courageous step by the women saw the perpetrators convicted in the landmark case.

ECAP is a partner organisation of the Civil Peace Service (CPS) of the Deutsche Gesellschaft für Internationale Zusammenarbeit (GIZ) GmbH in Guatemala. On behalf of the German Development Ministry, CPS is supporting the country’s work to recognise and process serious human rights violations during the 36-year civil war. Identifying those responsible and making them accountable is an important aspect of coming to terms with the past. ECAP has also set up self-help groups for women with the help of the CPS. Guided by psychologists, the women can talk to one another and thus process what they have gone through. Around 100 indigenous women who have survived sexual assault have now become involved across the country. They share their experiences with other women in the same situation and encourage them to stand up for their rights. By doing so, they are creating a growing support network and making the general public aware of their issues. More than 40 men are now involved in this network.

This kind of impact is giving women in the country hope. This is because, even 13 years after the end of the civil war, sexual assault is one of the biggest dangers for women in Guatemala. The project is therefore bridging the gap between the past and the future: in addition to dealing with war crimes, it also addresses the prevention of violence against women in the present.

For 20 years, the experts from the CPS have been working to promote peace in crisis and conflict regions and to prevent violence. The consortium comprises nine German peace and development organisations – and GIZ has been there since the very beginning. There are currently more than 300 CPS experts worldwide supporting partner organisations in their work to promote human rights and peace, including over 100 from GIZ.