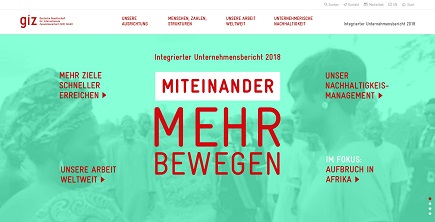 GIZ’s business volume up 17 per cent – A third of the company’s work relates to the climate.

Climate change is already threatening many people’s livelihoods, with developing countries and emerging economies particularly affected. The Deutsche Gesellschaft für Internationale Zusammenarbeit (GIZ) GmbH is therefore working worldwide on behalf of the German Government in the areas of climate and energy. ‘International cooperation is vital if climate change is to be reversed globally,’ said Tanja Gönner, Chair of GIZ’s Management Board, at the annual press conference in Berlin, adding that the worlds of politics, business, science, civil society and development cooperation need to work together closely.

Climate change mitigation and energy is therefore an important priority area in GIZ’s work. A third of the company’s work in the public-benefit business area relates to the climate. ‘The effects of climate change are becoming increasingly difficult to tackle: crop losses, diminishing livelihoods, hunger and disease are posing a particular threat for developing countries,’ said Martin Jäger, Chair of GIZ’s Supervisory Board and State Secretary at the German Federal Ministry for Economic Cooperation and Development (BMZ). ‘To promote global climate change reversal and improve people’s prospects in the long term, we need to invest even more in development in the future.’Together with its commissioning parties and partners, GIZ has already accomplished a great deal around the world: with GIZ’s support, greenhouse gas emissions were reduced by an equivalent of 36 million tonnes of CO2 between 2015 and 2017. During this period, GIZ supported 14 million people in coping with climate change – for example through improved flood defences and insurance against damage. Read the full press release on the annual press conference here.