Anis Fellahi: My research is about rural youth outmigration in Algeria, though the word “youth” here does not indicate the age group, rather the status of being young because that’s what shapes intervention policy targeting the youth nowadays. In other words, as this transitional period has been extended in recent decades, development and employment policy in most of the Majority World had to adapt, hence often define youth between the age of 19 and as late as 40.

Like all Maghreb countries, Algeria grapples with a youth bulge coupled with ubiquitous youth unemployment. In rural Algeria, migration is a “rite of passage” almost every young person (often male) has to undertake. My research addresses the perspective of migrants and the circumstances surrounding their decision making, as well as the adjustment mechanisms resulting from their departure. It is true that the implications of rural exodus in developing countries are similar and can be felt in both sending and receiving areas, but the conditions under which these population movements occur are largely context-dependent. In Algeria, successive governments have initiated several development programs in rural areas in order to reverse or at least curb the phenomenon since the country’s independence in 1962. Yet massive increase in population outpaced any effort to alleviate the ever-increasing migration pressures.

Specifically, I chose one province to analyze the migration choices of youth given the current government employment and development policies which seek to create jobs and preclude their outmigration. The broader theme of my work revolves around the interaction between migration and development, but it also incorporates other aspects related to migration such as the characteristics of migrants and non-migrants, the role of social networks, the allocation of remittances, and other context-specific aspects.

Speaking about migration within Algeria, what are the major push and pull factors for internal migratory flows?

Anis Fellahi: The push and pull approaches are one of the most relevant ways to explain both internal and cross-border migratory flows indeed. The initial post-independence era in Algeria was characterized by massive rural exodus driven by pull factors such as economic development, mainly the establishment of industrial zones near urban centres. The main push factors were primarily the impoverishment of rural zones as a consequence of the disastrous effects of socialist programs targeting the agricultural sector, such as the social self-governance program and the agrarian revolution in the 1970s. Today, even though such historic effects still reverberate, yet new factors have emerged and are not only triggering outmigration but are also causing its self-sustaining and perpetuation ad infinitum. The new push and pull factors go beyond the long-held classic assumption of a rational individual acting exclusively based on an economic cost-benefit calculus. For instance, the culture of migration has become deeply entrenched that non-migrants are often looked down at and stigmatized, even if migration by their peers may not be economically worthwhile. Other “unconventional” push factors include relative deprivation, the limited scope of current employment programs targeting the youth, as well as the lack of agricultural skills among the youth, rendering them incapable of investing in this sustainable rural activity. On the other side of the spectrum, the usual pull factors still hold true in migration destinations in Algeria especially the capital Algiers. This includes the provision of social services, the role of migrant networks, and the imbalanced social housing schemes between rural and urban zones.

Anis Fellahi: At this stage, I am still in the process of making sense out of my data. But it is noteworthy to mention several unexpected preliminary findings: First, government programs such as the rural housing can have counter-productive effects. For example, the inconsistency and lack of transparency in the distribution of rural housing funds among rural families lead non-beneficiaries to feel unjustly left behind. This further instils relative deprivation among rural families, which in turn may affect social cohesion over time. Second, gerontocratic practices (whether at the macro policy level or at the meso household or family level) are deep-seated and are impeding the feasibility of any genuine sustainable rural development targeting the youth, hence further marginalizing the youth and adding up to the migration pressure. Third, social networks are often thought of as conducive to migration as they reduce the financial and psychological costs of relocating, however, it is also not uncommon that migrants choose not to be a burden on their relatives and friends. Fourth, a mismatch between policy makers on one hand and the aspirations of the youth population on the other precludes a genuine effective employment and rural development policy.

Anis Fellahi: Having personally been a migrant for many years in different countries, I have come to appreciate the migrant life, especially from the perspective of Algerian youth, many of whom aspire to migrate either internally or to Europe. It is important that my work provides researchers, policy makers and practitioners within the development arena with insights and understanding of the rural youth outmigration phenomenon in Algeria. The qualitative approach that my research adopts treats migrants as subjects rather than objects, giving real voice to the participants. In a nutshell, my plan is to have a summary of my dissertation translated into Arabic and published at the Social and Human Sciences Review at the University of Batna, Algeria. Also, my research would provide policy recommendations on the implementation of development programs in rural Algeria. Throughout my field work and data collection phase I have come to know several key decision makers of such programs at the local level, therefore it would be possible to share the outcome of my policy recommendation aspect with them.

Anis Fellahi: I believe that each one of us has a responsibility to be aware of the impact that small decisions on a daily basis can have on our health, the environment, and the generations to come. I could point out few things but they are by no means an exhaustive blueprint on living sustainably because I am not an expert on this. First, reducing meat consumption (mainly red meat) and replacing it with better quality protein sources not only can have health benefits but it can also undermine the meat industry which is responsible for the methane emissions in the air. And methane is known to be a harmful greenhouse gas, in fact way more harmful than CO2 so it is believed to be a major contributor to global warming. Second, using pollution-free means of transportation like bicycles can boost our health and keep our air clean. If the weather would not permit, then public transportation can always be the best alternative. Third, do your shopping plastic-free by making sure you have your own reusable bags and bottles, and by refusing any plastic bags offered by cashiers. Needless to say, plastic takes hundreds of years to decompose and so is its polluting effects. Therefore, eliminating this “poison” can have a positive impact on the environment and particularly save the marine life. Fourth, planting trees and caring for them whether at the front yard of a house or anywhere else may not reverse global warming of course but it can remind us of our responsibility to preserve nature and lead a sustainable lifestyle with minimal carbon footprint. Few years back, I was personally engaged in a small group of people who organized the planting of hundreds of sycamore, eucalyptus, and cypress trees in different locations in my city in Algeria. Now the trees have fully grown and to me and my friends, they represent a symbol and a reminder of our commitment to the environment. 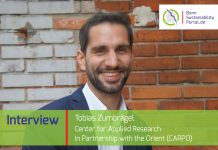 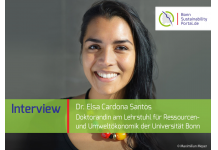 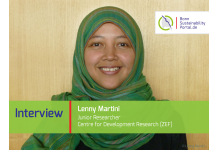 Lenny Martini on the Creative City Concept in Bandung, Indonesia