As a senior researcher at the UNU EHS, could you take the reader into your research work?

As a Senior Researcher at UNU-EHS I look into migration related to the environment, especially climate change. I have recently completed projects on climate change and migration in the Pacific with UNESCAP, and in Haiti with IOM and carried out consultancies with Wetlands International and Unicef UK.

You have published extensively on climate change and migration. How do these seemingly different topics connect?

RO: People have always moved to avoid, or exploit environmental conditions. It is possible that movements such as the Völkerwanderung in the Europe in middle of the first millenium, the potato famine affecting Irlend in the 1840s and the Dust Bowl in the USA in the 1930s were all related to alterations in the prevailing climate.

Most people‘s image of climate change migration is of sea level rise drowning a low-lying island states, partially a result of advocacy by those states and of the media’s love for simple imagery. The reality is of course more complex. Climate change impacts people in a wide variety of ways. Quick onset hazards such as floods and cyclones can drive people out of their homes for survival. Slow onset disasters such as droughts, changes in rainfall and coral bleaching can affect livelihoods, partcularly those based on farming or fisheries and encourage households to send out migrants to diversify income sources.

However, this is only part of the complexity. In the real world, when people make the decision to migrate, it is in the context of other interconnected economic, political, social and cultural conditions.

For example in my recent research in the Pacific Island states of Kiribati, Tuvalu and Nauru suggests that people are already moving for environmental reasons; floods are becoming more frequent and extreme, but at the same time drought is becoming more of an issue. This means people are moving to find a safer place to live, get access to better land and water, but also for education and to be near family.

What do you regard as a long-term solution to current migration problems?

RO: Migration in itself is not necessarily a “problem” – migration just means people moving – which is a neutral concept that cannot, and should not be “solved”. With regard to environmental migration, there are essentially two ways to address the problem of displacement – those movements which are forced, and certainly problematic.

Firstly, prevention – we can make it less necessary to people to leave their homes due to natural hazards. This essentially means building communities’ resilience, in other words, helping to make people’s livelihoods and communities more sustainable in the context of the changing climate and able to respond and recover from shocks.

Secondly, people will move, and their movements should be as dignified as possible. This means that people have some choice with when, where and how they move and their rights are not infringed while they move, or in the destination community. Such issues are particularly acute in the case of children as they can lose access to education, food, water and healthcare when they move due to the impacts of climate change.

For both of these to be achieved, new knowledge needs to be produced, that is where UNU-EHS is trying to contribute.

What are the most important findings you have discovered concerning climate change?

RO: Although it is impossible to say definitively that climate change has caused a particular natural hazard, we can be quite confident that climate change is disrupting climate patterns and therefore likely to be causing more extreme and intense weather now and especially in the future. In our research in the Kiribati and Tuvalu we found that the vast majority of housholds have been impacted by a natural hazards such as flood, cyclone or drought in 2005-2015. Over the same period, about 10% of migration in Kiribati and Tuvalu was attributed to deteriorating environmental conditions. Therefore it is likely that climate change is partially driving migration in these countries already. We also found that most migration has been from outer islands to the capital islands of each country and built models which suggest that this trend will continue for the first half of the century resulting in further overcrowding in these exposed islands.

RO: I have always been interested in the weather and climate and even as a child had a slightly morbid fascination with disasters. My motivation is creating knowledge on the topic, and more specifically knowledge which I know can have a practical output – I am less interested in ivory tower research. Everything we do at UNU-EHS is of use to policy makers, be it at the local, national or international level. I like to think that my work does, and will have some positive impact on people’s lives. I try not to think about work in the evening, my 2-year old son normally takes up my time and energy!

RO: How many people will be displaced by climate change?

I think this is an important question, but a flawed one. And the reason is that nobody knows, or realistically can know. There is just too much uncertainty surrounding to what extent the climate will change, how this will manifest into hazards, to what extent development, sustainable or otherwise will affect vulnerability and exposure of populations to hazards, how the economy, society and culture will interact with the environment, how will people be able to adapt to climate change and how will people’s perception of risk will influence decisions to move. We can make projections for small areas and small populations, but general models are speculative at best.

Lisa Biber-Freudenberger on synergies and conflicts in the implementation of sustainability... 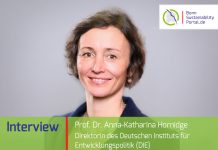 Anna-Katharina Hornidge about the linkages of research, policy advice and teaching... 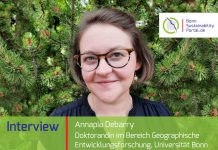